One of our Venues, who appear on Pink Wedding Venues - Heaton House Farm, Cheshire, have won ANOTHER award recently in The Wedding Industry Awards. Congratulations, on winning the award for "Best Events Team" for the North-West region.

Here's their Press Release they kindly shared with us:-

This is the second year running that the Heaton House Farm team has won the Best Events Team award for the North-West region in The Wedding Industry Awards.

In addition to this regional success, the company will also be entered nationally, the winners of which will be announced at a ceremony to be held at the Cafe de Paris in London next year. Heaton House  began running local events some 25 years ago, but for the past 16 years the firm has specialised in weddings and corporate events.

Those who work in the wedding industry covet these awards because it is brides and grooms who have married in the past 12 months that decide who wins. The panel of judges looks at branding, service and products, but the brides and grooms make the nominations and provide feedback about customer service.

Damian Bailey, the founder of the Wedding Industry Awards, took to the stage at Heaton House Farm to present this year’s regional awards. In total, he presented 23 awards to an enthusiastic audience, which included the nominees, their supporters and representatives of other companies involved in the wedding industry. 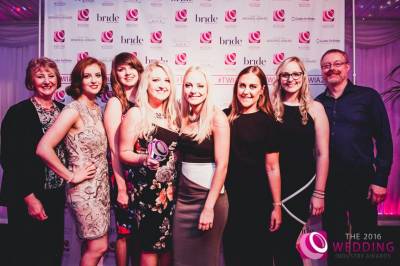 “Heaton House Farm was the perfect location to host the TWIA North West awards and we loved seeing everyone enjoy themselves after a wonderful year of weddings. We too have enjoyed a fantastic season hosting a number of weddings, and to see our team be rewarded with the title of ‘Best Events Team’ is testament to their hard work and sheer determination to provide the best for our couples. It's a pleasure to work with every single one of them. Nothing is ever too much for them and everything is done with a smile."

There was plenty of space at Heaton House Farm for over 200 attendees from some of the region’s top wedding suppliers. The evening kicked off with cocktails, some of which were served from a converted 1970s Volkswagen camper van, which was aptly called Beetle Juice. The canapés were provided by Macclesfield-based caterers, Vanilla in Allseasons.

In total 23 firms will go forward to the national awards. Amongst them are recommended suppliers, Glorious Tiaras from Macclesfield who won the Accessory Designer of the Year category as well as LOVE Bridal Boutique from Altrincham, who won the Bridal Retailer award and Sam Fitton Magician, winner of the best Wedding Entertainment, who were both victorious last year, scooping the National award. They will once again be going through to represent the North-West at the national awards.

To read more about their, stunning, wedding venue please click HERE to be taken to their profile page.

On behalf of the team, at Pink Wedding Venues, CONGRATULATIONS! x